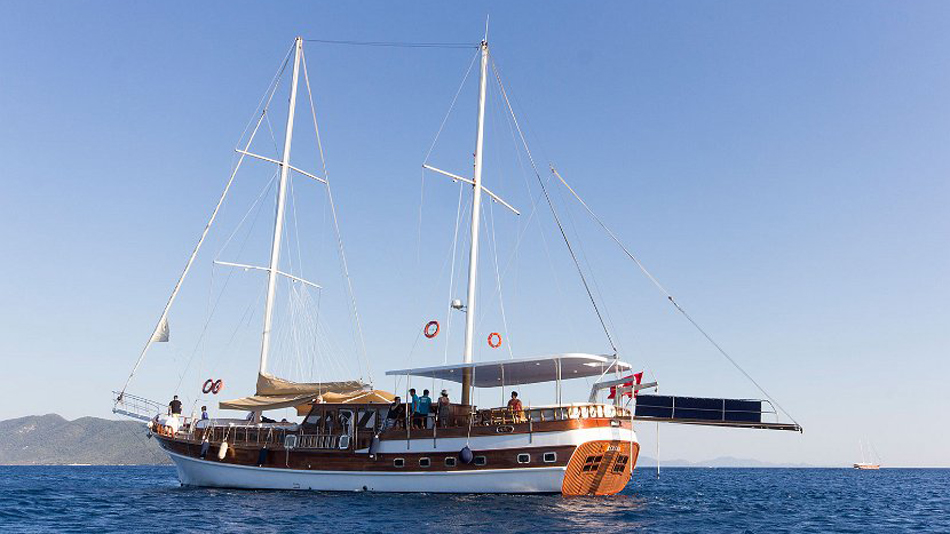 GULF OF HISARONU –  One week from Bodrum

Day 1 Sun Bodrum
Boarding starts at 15:30 from Bodrum Harbor. On the first day, our boat will remain anchored in Bodrum Port for dinner and an overnight stay. Bodrum has a history that goes back to the 12th century B.C. The city which was called ‘Halicarnassus’ was the birthplace of Herodotus; the ‘Father of History’ who lived in the 5th century B.C. The ‘Mausoleum’ of King Mausolus (350 B.C.) one of the Seven Wonders of the World is in this city. The only structure that survived from the Classical Era is the Amphitheatre. It is one of the oldest theatres in Anatolia with a capacity of 13.000 guests and it is still hosting many shows and concerts for the art-lovers of Bodrum. Another place that you should visit when you arrive in Bodrum is the landmark of the city, the ‘Castle of Saint Peter’. It is one of the best preserved pieces of architecture with a history dating back to the Middle Ages. ‘Myndos Gate’ through which Alexander the Great entered Halicarnassus is another place that you should not miss.

After breakfast, you will be informed about the cruise itinerary and the boat. Then we will start to cruise to Palamutbuku Bay early in the morning. We will anchor at Ince Burun after lunch and swimming breaks. We will stay in this lovely bay for dinner and an overnight stay.

After breakfast we will cruise to Aktur Bay. Then our first stop will be Bencik Bay; which has a very narrow entrance but a unique view once you get inside. Bencik is located at the narrowest part of the peninsula that divides Hisaronu Gulf from the Gokova Gulf but it is located at Hisaronu side. In 550s B.C. the Cnidus people wanted to dig a tunnel in the narrowest land piece of the peninsula between the Hisaronu Gulf and the Gokova Gulf as a defense line against the Persians. That way they would make two peninsulas one island and the defence easier. They started with diligence and put in a lot of effort; however, in the end they could not manage and the city was conquered by the Persians. Dinner and an overnight stay will be in Bencik Bay.

After breakfast, we will anchor in Emel Sayın Bay and you can enjoy a swimming stop in this lovely bay. For lunch we will dock in Orhaniye. In Orhaniye Bay, you will see the unique scenery of a natural tidal formation called ‘Kız Kumu’ (Maiden’s Beach).

There are so many myths about this reddish sandpath going from the shore to the inner parts of the sea which is suitable for walking along. On a tiny island located in the bay, you can see the wrecks of an antique castle, a sign of an ancient city. Today, our final destination will be Selimiye for dinner and an overnight stay.

After anchoring in Dirsekbuku, we will go to Bozburun which is a small fishing town. This area was popular and suitable for sponge-diving but nowadays the people of the island are no more interested in sponge-diving as it is not financially beneficial and is dangerous. In recent years spongediving has been replaced by gulet tourism and nowadays Bozburun Gulets take their place in this sector.

We will cruise to Datca. Food and water will be supplied to the boat from Datca Harbor. Datca was founded by the Dorians who came from Aegean Sea to the southern coast of Ionia in the 7th century B.C. The island has no humidity at all and has fresh air with plenty of oxygen. The historian Strabon was right when he remarked of Datca’s weather: “God would send his beloved servants to Datca to live longer”. According to a myth while the Spanish pirates were passing by the coast of Datca, they disembarked people with Hansen’s disease in Sariliman Bay and these abandoned people recovered from their disease with the help of the clean weather of Datca. You may take a walk in Datca Harbour. We will cruise to Cnidus for dinner and an overnight stay. Cnidus was a developed city in science, art and architecture. Eudoxos, a very popular astronomer and maths professor; Dr. USDyphon; Polygontos, a popular painter; Skopas and Bryaksis of Faros, the most famous sculptors of the era; Sostrates, the architect of Alexandrian light house -one of the seven wonders of the World- and Ktesias the doctor, who saved the life of a Persian king from a disaster, lived on this island. Dr. USDyphon and his students founded the second biggest medical science school in Cnidus. The island also hosts the largest sun clock of its time which was erected by Eudoksos. Knidos was the home for Aphrodite’s monument and in those times the city was famous for brothels and became popular for sailors and Arabic tradesmen. You may take a walk on the shore to see the ruins

We will start to cruise early in the morning to Karaada (Black Island). Breakfast and a swimming break will be at Poyraz Bay which is located on the northern side of the island. This is such a nice bay with its turquoise-blue waters. We will be anchoring at Meteor Bay for lunch which is located on the southern side of the island. There is a meteor hole here and this is how the bay got its name. Here you may jump over the platform into the deep water. You may also take a walk through the underwater caves which are very near to Meteor Bay for a small local fee. We will dock in Bodrum Harbor for dinner and an overnight stay.

The guests will leave the boat with precious memories by 10:30 after breakfast.

$620
per person based on sharing
Book Now