The world’s most luxurious train journeys

December 8, 2015 By Kerry Ke in Tips & Tricks, Travel Comments Off on The world’s most luxurious train journeys

– By John Malathronas, for CNN

There once was a time when train travel was an adventure.

For many travelers, the constant change of scenery was preferable to the monotony of a lengthy boat passage.

Many routes disappeared and the ones that remained were the domains of the hardy backpacker: uncomfortable, inconvenient and rough.

But in recent decades rail travel has come full circle and luxury trains have returned with a vengeance.

Never have there been so many contenders promising to pamper you through landscapes remote and exotic.

No other train journey evokes romance and adventure quite like the famous Venice Simplon-Orient-Express, setting of notorious Agatha Christie mystery “Murder on the Orient Express.”

The train still rolls by some of Europe’s most captivating scenery through cities that have become legends in themselves: London, Paris, Innsbruck, Verona and Venice.

Its Art Deco glamor has persevered through the decades while the train’s elegant suites recall an older, more stylish age.

Most guests board the train in London for the one-night journey to Venice. But passengers traveling from Italy might notice a set of unusual crates being delivered personally to the head chef on the Paris platform.

They are filled with freshly caught lobsters to be served during a delicious brunch before the train reaches the French port of Calais — only available on the westward route. 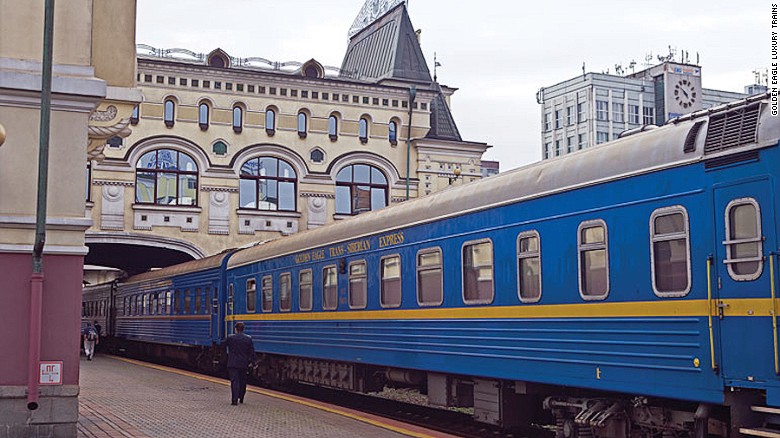 The Golden Eagle is a luxury version of the Trans-Siberian, featuring en-suite bathrooms, air-con in the summer, full heat in the winter, laundry services, TVs, a resident pianist and an English-speaking doctor.

The two-week passage feels more like a cruise than a train ride as it stops for daily excursions along the way.

It rides along Lake Baikal, hauled by a Soviet Era steam locomotive, and makes a detour to Ulaanbaatar, Mongolia’s capital.

To help passengers acclimatize in extravagance, five-star accommodations in Moscow and Vladivostok are provided.

The Blue Train’s 27-hour, 1,600 kilometer journey crosses South Africa diagonally, stopping at the diamond mines of Kimberley on the way south and at the eccentrically colonial outpost of Matjiesfontein on the way north.

Luxurious surroundings apart, the image that lingers afterward is of the friendly and helpful staff.

Many of the butlers have worked on the train for years and are on call 24/7 for a drink, a snack or even to iron clothes.

Some of the luxury double suites have full size bathtubs — there’s nothing quite like lying in a sea of bubbles, glass of champagne in hand as the savannah rolls by.

Celebrating its 70th anniversary in 2016, the Blue Train is now offering special journeys from Pretoria to Hoedspruit, in the Kruger Park area.

The Ghan: Adelaide to Darwin

The Ghan is a three-night, 2,979-kilometer tour from Darwin to Adelaide that allows travelers to cross the Australian continent while peering into the endless uniformity of the red-earthed antipodean bush.

The Ghan offers scheduled excursions in Katherine and Alice Springs, while special stops provide an opportunity to experience either an outback sunrise in Marla going north, or a nightcap under the Milky Way in Manguri going south. 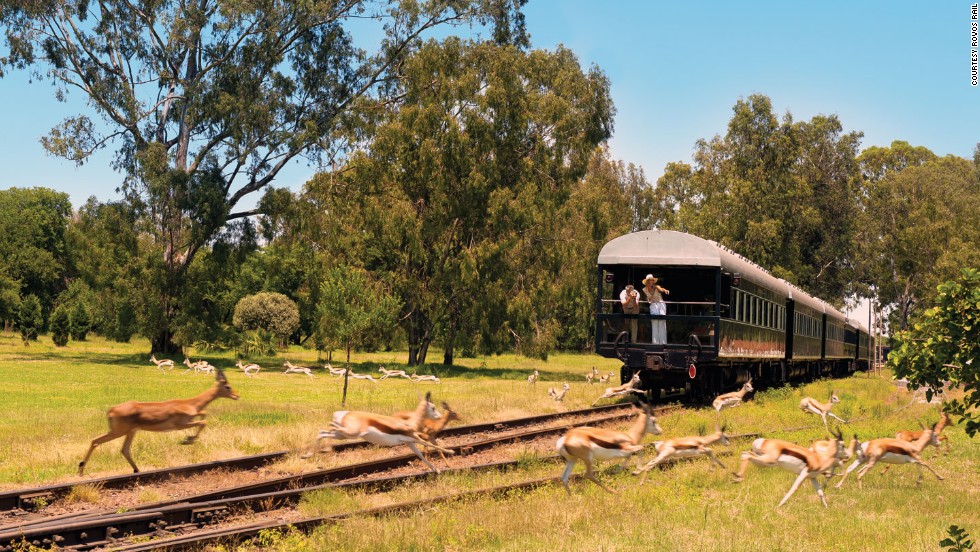 Rovos Rail is a slower, chiller version of the Blue Train, featuring an extended network of far-flung destinations in South Africa, Zimbabwe, Namibia and Tanzania.

Luxurious and lavish cabin surroundings mean the Rovos ride is not an end in itself, but an essential part of a long journey with several overnights.

Because the train never travels more than 60 kilometers per hour (37 m.p.h.) passengers can open windows for fresh air or to photograph the landscapes.

In fact, the staff provide sets of goggles so that, should the urge arise to stick heads out of windows, dust in eyes won’t be a problem.

Popular journeys fill up quickly: the leisurely ramble from Pretoria to Dar es Salaam, the Namibia safari and golfing trips have sold out well into 2017.

The 4-day Pretoria to Victoria Falls journey in the Pullman suite costs $1,504 per person

The Rocky Mountaineer: Banff to Vancouver 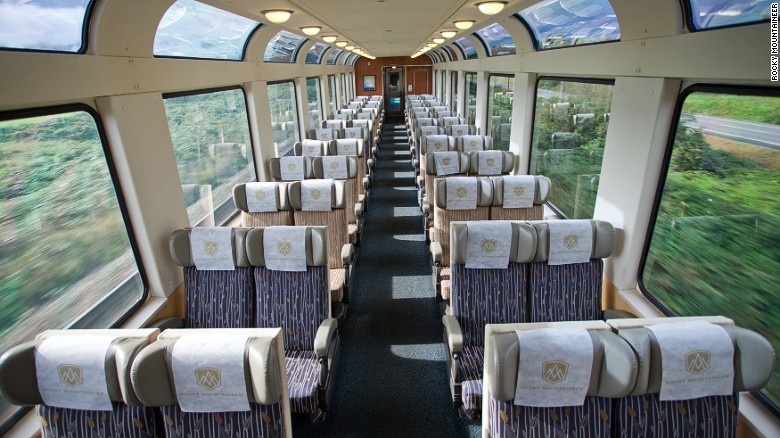 The Gold Leaf Service of the Rocky Mountaineer offers one of few five-star rail experiences in North America.

There are several routes into the Rockies, but it’s the classic Banff to Vancouver ride that still captures the imagination.

This was the last, arduous leg of the great rail expansion westwards that united Canada in the late 1880s.

Although most tourists prefer the summer season, September to mid-October is possibly the most romantic time to travel, when the leaves turn to a vibrant mix of reds, oranges and yellows and fresh snow accumulates on the mountaintops.

To ramp up the romance, couples traveling together can rotate their seats so they face each other during the journey.

A journey aboard the Belmond Royal Scotsman is a unique way to see the magnificent Scottish countryside in a Downton Abbey atmosphere.

Travelers can choose from several round trips from Edinburgh lasting between two and seven days, but the classic voyage is the four-night passage to the Scottish Highlands.

It includes visits to distilleries and sightseeing excursions to castles.

The UK’s only luxury sleeper train, it has a bar stocked with more than 50 kinds of whisky.

Fall is perhaps the best time of year to travel, when the purples of wild heather color the Scottish meadows.

The Canadian: Toronto to Vancouver

VIA Rail’s four-day The Canadian journey takes travelers through 4,466 kilometers of beautiful scenery, linking two of the country’s most exciting cities, Toronto and Vancouver.

For a year now, the rail company has been quietly adding deluxe sleepers and gourmet meals to its standard routes.

Its new Prestige class now offers seven swanky bedrooms, but these will increase to 13 in summer 2016.

Each comes with its own ensuite shower, a washroom and minibar with alcohol included in the ticket price.

At night, when the Canadian wilderness lies invisible, an in-carriage flat-screen TV will keep passengers entertained with preloaded content on a USB stick.

Worth noting: this is the only regular scheduled passenger train in North America to offer double beds instead of upper and lower bunks or just singles.