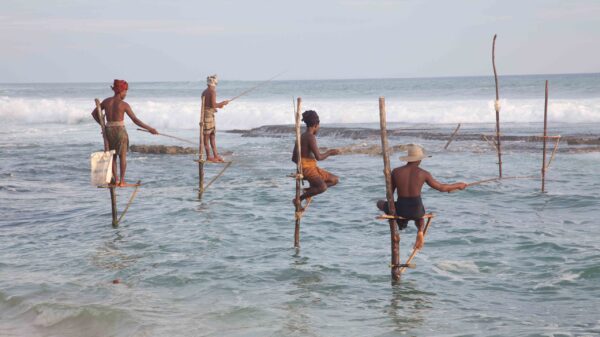 Day 1: Arrive in Colombo –  Negombo
At the airport you will be welcomed and met by your chauffeur guide. Transfer from Apt to Negombo and check in at your comfortable luxury hotel, directly by the sea. Unwind and relax from your overseas journey, walk along the wide sandy beach, take a dip in the pool or rejuvenate with a soothing massage in the hotel SPA.

Today proceed north east, to the so called “cultural triangle”, offering lots of interesting sites to be discovered. Stay in the very center of the triangle at Sigiriya or Habarana, offering the perfect base for the next 2-3 nights. Travel via Kurunegala to Dambulla and visit the cave temples carved into the granite rock, rising 160m above the countryside. The site is consisting of 5 rock caves with numerous Buddha statues and beautiful murals. The history dates back to the 1st century BC, to the days of king Vattagamini, who found refuge in the caves, hiding from the invaders. After lunch get ready for an exciting elephant safari where you will be taken on elephant back through the jungle and across shallow waters by a patient grey giant.
Check in at you hotel, where you will be staying for the next three nights!

The number one “must see” attraction of the island is the spectacular rock fortress of Sigiriya, a gneiss rock towering 200m above the surrounding countryside, embellished with the remains of prince Kasyapa’s royal palace, built in the 5th century AD, on its summit plateau. Enter via the carefully designed water gardens with ponds and structured lawns, before starting to climb up the steps to the mirror wall and the famous frescoes of the Sigiriya Damsels, 21 beautiful ladies. From here continue up to the lion platform, from where a final iron staircase leads to the very top. The lion rock has been declared a world heritage site in 1982. Visit Sigiriya early in the morning, or better yet, late in the day, when the crowds have disappeared and the evening sun makes the rock glow. In the morning drive to close by Aukana, the Buddha is the most perfectly preserved ancient statue in Sri Lanka, a copy of it can be seen in Colombo, opposite the BMICH conference hall. The elegant statue of the “sun eating” Buddha is 12m high and stands near the Kala Wewa tank.

Today is reserved for a full day visit of Anuradhapura, the great ancient city of Sri Lankan civilization and royal capital of 113 successive kings. In the 19th century, British explorers have rediscovered the “lost city” with its magnificent dagobas, palaces, temples and shrines. The Sri Maha Bodhi, possibly the oldest tree in the world is more than 2000 years old and is the spiritual and physical center of the city. It is said to be a sapling of the original tree under which Buddha attained enlightenment. The gigantic Jetavanarama Stupa ( 122m), the Ruwanweliseya, the Abhayagiri Monastery, the Samadhi Buddha, the twin ponds, the Isurumuniya Temple and the king’s palace are only some of the main attractions not to be missed. In the afternoon return back to your hotel and relax with a cup of fresh Ceylon tea, or something stronger, after this exciting day.

If you are in the mood for more of the ancient culture and sites, head to Polonnaruwa, which served as the island’s capital from the 11th to 13th century, after the downfall of Anuradhapura. Here the sites are better preserved and located closer together, which makes it more convenient. Parakramabahu I. is regarded as the last great king of Sri Lanka, he and his successor,  Nissankamalla have gone through great effort to erect the majestic royal palace and the Quadrangle, including the Vatadage, arguably the most beautiful building in Sri Lanka. Further north you find the highlight, the pinnacle of rock carving in the entire island, the four magnificent Buddha statues of the Gal Vihara. A 14m reclining Buddha of serene beauty, a standing and a seated one, all delicately crafted by an outstanding sculptor. After this, drive south to Kandy, via Matale, the center of the spice industry and visit one of the numerous spice gardens, to see how cinnamon, vanilla, pepper and other spices are grown and harvested. Arrive at Kandy and check into you hotel, offering a splendid view over the hills surrounding the city. Enjoy and relax at your hotel or take a walk through the city center and watch a folklore show with the famous Kandy dancers if you are not too tired. As per your choice, spend 1 or better yet, 1 night in Kandy!

Located in the heart of the island and protected by its geographical position, the Kandyan kingdom was the last stronghold of the Singhalese culture & tradition, until the last king had to surrender to the British in 1815. Walk around the lake and visit the Temple of the Tooth, the most important Buddhist temple of Sri Lanka, attracting pilgrims and tourists from all over the world. From here continue to Peradeniya Botanical Gardens, with the stately Royal Palm Avenue, giant fig tree, rare bamboo and palm tree species as well as delicate orchids. After a leisurely walk, leave Kandy towards Nuwara Eliya , the road climbing 1400 meters, hairpinning slowly upwards through a beautiful landscape of tumbling waterfalls and dramatic hills, each turn offering another stunning view. As the road ascends the air gets cooler and the eye can feast on the glistening greens of the tea bushes of the many estates along the route. Stop at a tea factory for a visit, learning how the famous Ceylon tea is plucked, dried, withered, rolled, fermented and finally packed and enjoy a freshly brewed cup on the spot. Proceed to Nuwara Eliya, established by the British in the 19th century, a welcome place to escape the heat in Colombo and coastal areas during March and April, with Victorian style chalets and hotels, a lovely golf-course and racecourse.

Today drive via Welimada to Ella, an idyllic little village , offering the most amazing view through the narrow cleft in the hills, the so-called Ella Gap, down to the hills below. Proceed down to Wellawaya, finally leaving the hills behind and south to Tissamaharama, former capital of the Ruhuna kingdom and great location for wildlife safaris to Yala and Bundala or a visit to Kataragama. “The Safari” is a comfortable and stylish hotel, directly overlooking the Tissa lake or stay even closer to the Yala National Park at Chaaya Wild Yala Resort. Yala is currently the most visited park, home to herds of elephants, crocodiles, water buffalo, deer, monkeys, but also to the sloth bear and elusive leopard as well as many bird species. An adventure not to be missed.

In the morning drive west along the southern coastal road to Dickwella and visit the largest Buddha Statue of the island (50m) at Wewurukannala or see the “blowhole”, formed by a narrow cleft in the cliff which funnels a water jet straight up into the air. Continue via Matara and Weligama, where the stilt fishermen sit on their poles fishing, quite close to the shore. In Galle stroll through the newly renovated streets, lined with little shops, hotels and cafes, of the old Dutch fort, a UNESCO world heritage site. From the lighthouse walk on top of the ramparts, enjoying the view over the Indian Ocean. Proceed further along the coastal road, if you’re a continuing your holiday in a beach resort or take the faster route via the new highway back to Colombo, if you prefer.
It is recommended to have at least one more night in Colombo/Mt. Lavinia or similar and return to your home country on the next day only, in order to avoid a rush and being pressured for time on the last day of your holiday.

Explore Colombo and do some final shopping before heading to the International Airport for your return flight or continue your individual extension program!

Be the first to review “Highlight of Sri Lanka” Cancel reply