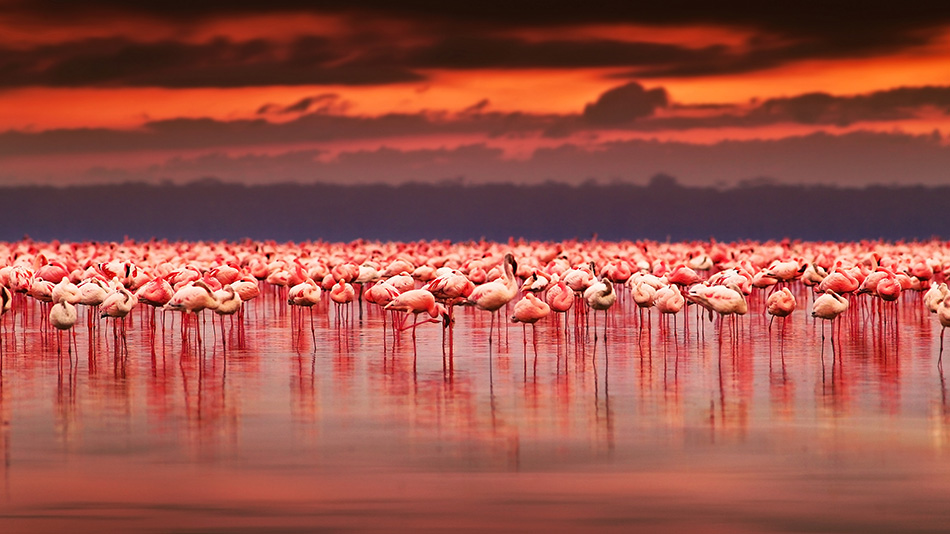 Day 1 (Sun) Nairobi
Upon arrival at Nairobi, transfer to your hotel.

Day 2 (Mon) Lake Nakuru National Park (B/L/D)
Drive to through the Great Rift Valley to Lake Nakuru National Park, famous for thousands of flamingo and sanctuary for Rothschild giraffe, black and white rhino and the elusive leopard. Later in the afternoon head out for a game viewing drive in search of both the black and white rhino, the endangered Rothschild Giraffe (Twiga), the elusive leopard as well as a host of other plains game and with a chance to visit the shores of the lake where you may walk with millions of flamingos.

Day 3 (Tue) Masai Mara Game Reserve (B/L/D)
Depart for the Masai Mara National Reserve, perhaps the only region left in Kenya where you may see animals in the same superabundance as existed a century ago. Enjoy an exciting game-viewing drive in this vast and expansive reserve teeming with game.

Day 4 (Wed) Masai Mara Game Reserve (B/L/D)
Masai Mara is the northern most extension of the Serengeti Plains and one of the richest wildlife Game Reserves. Full day game viewing drives in search of the ‘big five’ and encounter with Black-manned lion, the elusive leopard, stately giraffes, and vast herds of elephants, rhino, thundering herds of zebra, migrating wildebeest and numerous other plains game.

Day 6 (Fri) Serengeti National Park (B/L/D)
The Serengeti’s endless plains bear witness to the largest and the longest overland migration in the world. Millions of plains game – wildebeest, zebra, impala feed and breed in the thousands in readiness for the annual migration to the Mara ecosystem. The predators are easy to spot as they hunt. Full day in the Serengeti with game-viewing drives.

Day 7 (Sat) Ngorongoro Conservation (B/L/D)
Depart for the Oldupai Gorge where hominid footprints believed to be 3.6million years old were found. Enjoy a guided tour before continue to the rim of the spectacular Ngorongoro Crater with stops to admire the breathtaking vista before arrive at the lodge to relax.

Day 8 (Sun) Ngorongoro Conservation (B/L/D)
Descends some 600 metres into the crater, the home to an abundance of wildlife and a photogenic paradise for a full day game-viewing drive. Enjoy picnic lunch and return at the lodge for dinner and overnight.

Against this magnificent backdrop roam vast herds of ‘giant’ elephant accompanied by a kaleidoscope of other fabulous beasts – lion, buffalo, cheetah, giraffe, baboon, gazelle hippo and wildebeest. Amboseli National Park is also an ornithological paradise with over 400 species of birds, all manner of reptilian, flora and fauna and some of the most soul-searing views in Africa. An afternoon game viewing drive in search of the ‘big five’ among other animals. Her breath-taking scenery – one of the best places for a photogenic view of Mount Kilimanjaro is next to none.

Day 11 (Wed) Amboseli National Park (B/L/D)
Full day in Amboseli with an early morning game drive before breakfast and enjoy the rest of the morning at leisure. Later in the afternoon heading out for yet another game viewing drive on this majestic backdrop to one of Kenya’s most spectacular displays of wildlife – lion, elephant, leopard, rhino, cheetah, buffalo and hosts of plains’ game.

Day 12 (Thu) Nairobi & Depart (B/L/D)
Amka! Your last trail of the African Savannah – hopefully you may spot some of the animal that may have eluded you. Say ‘Kwaheri’ to your lodge manager and his team as you drive back to Kenya’s colourful capital city, Nairobi.
Tonight you will be guest of the Manji Family at their residence for dinner before being transferred to the airport for onward flight.

Be the first to review “Great African Safari” Cancel reply