Day 1 Rostov-on-Don Embarkation
Today, you are transferred from Airport or railway station or City Hotel to your ship.
Welcome aboard! After checking in with reception, crew members will accompany you to your cabin for accommodation and unpacking.

Day 2 Rostov-on-Don, Starocherkassk
Bus city tour acquaints you with the capital of the Don region and the Southern Federal District of Russia, its history, architecture and culture. Rostov-on-Don was founded in 1749 and received its name after the fortress of Saint Dmitry Rostovsky. The settlement was built to defend the south border of Russia, extended rapidly and became one of the largest merchant centers being at the same time a connecting point between Russia’s central part and the Caucasian region. During the tour you will see the sights of architectural ensembles in Bolshaya Sadovaya Street, merchants’ mansions, cross the borderline between Europe and Asia, listen to the stories about “Rostov Las Vegas” – a recreation area on the left bank of the Don river, stroll along the Don embankment, view the monuments dedicated to real people and events, literature characters. In about two hours after set sailing from Rostov, you will make a stop in Starocherkassk. During the walking tour, you will visit the main square – “Maidan” with various cossack trophies brought from several Azov campaigns in the 17th century; cossack houses – “kurens”, the main Cathedral of Resurrection, Ataman’s estate; get acquainted with the everyday life, traditions and rituals of the cossacks.

Day 3 Sailing Day
Today you will have a unique chance to observe sailing through the locks of the Volga-Don canal opened on July 27, 1952. Due to the canal construction, all five seas of the European part of Russia (at that times the USSR) were included into the united water system. The total canal length is 101 km and it comprises 13 locks, 3 water reservoirs, 2 hydroelectric complexes, 13 dams and some other constructions. Every lock of the canal is richly decorated with sculptural compositions depicting certain periods of the canal construction and history of the country. You will be able to take impressive pictures and after that to participate in various onboard activities conducted by our guides.

Day 4 Volgograd
Today you will visit Volgograd – a city known all over the world as a symbol of WW II tragedy. The first fortress founded there in 1589 got the name of Tsaritsyn and later in 1925 renamed after Josef Stalin – Stalingrad. During the times of the WW II Stalingrad became a place of the decisive battle against Nazi Germany. Approximately 90% of all the city constructions were raised to the ground, thus you will see a totally rebuilt new city which still preserves some vivid evidence of its glorious past. During the tour you will see a Mill opposite Pavlov’s House – the only unreconstructed building since the WW II times; Mamaev Kurgan (Mamaev Hill), a monument ensemble created on the total square of 220 hectares to commemorate the most intense fighting during the Stalingrad Battle, including the Glory Pantheon and the highest concrete sculpture in Europe – “The Motherland Calls!”

Day 5 Sailing Day
The whole day today you will be sailing along the longest river in the European part of Russia – the Volga River or “Mother Volga” as Russians say. You will admire its picturesque landscapes and take some amazing pictures of the flora and fauna of this area. During the day our guides will entertain you with various films, quizzes, contests and onboard musicians will perform one of their concerts.

Day 6 Samara
During the tour today you will learn the history of Samara fortress, its development and expansion, visit historical center with a unique building of Samara Academic Drama Theater named after M.Gorky, the estate of the merchant Kurlina, Lutheran Church of St. Georg and Roman Catholic Church built in Gothic style, “Zhigooly” brewery, a functioning Iversky Nunnery, Stalin’s bunker, a modern square of Glory and a real launch vehicle “Souz”. You will find out why particularly Samara (former Kuibyshev) had been chosen as the alternative capital of the USSR during the times of the WW II in case Moscow fell.

Day 7 Kazan
Today you will visit Kazan the capital of Tatarstan, the city with a thousand years of history, the former capital of the Kazan Khanate, the place where the East and the West, Islam and Christianity come together. You will learn some interesting facts about its history, visit the territory of Kazan Kremlin and its legendary and breathtaking Qol-Sharif Mosque erected according to the archive sources as a symbol of nation’s revival, the Annunciation Cathedral, President’s palace, and the mysterious leaning tower Soyembika named after the last queen of Kazan. Driving along the Kremlevskaya Street you will be amazed by the architectural beauty of the most presentable historical buildings of Kazan. While visiting Staro-Tatrskaya sloboda (Old Tatar settlement) you will clearly feel the merging of the East and the West, see the first stone mosque al-Marjani and find out where the countless treasures of Kazan Khans are kept. At the end of the tour, you will stroll along the most popular and contradictory street of the city – Bauman street with the building of the National Bank, monument to Shalyapin and enjoy traditional Tatar cuisine in one of the numerous local restaurants or buy souvenirs. And do not forget to touch bronze frogs near the fountain which is believed to bring financial luck.

Day 8 Nizhny Novgorod
The town was founded in 1221 by Prince Yury Vsevolodovich and due to its favorable geographical location became a large trade and cultural center. In 1932 it was renamed Gorky after the writer Maxim Gorky who was born there, but in 1991 the town got back its historical name. During the Soviet era, the town bore a status of “the closed” city” and thus became a place of exile for the disgraced academician A.Sakharov. During the tour you will explore the main sightseeing attractions of Nizhny Novgorod, drive along its historical streets which had preserved its original beauty and splendor, visit central squares named after Minin and Pozharsky, Gorky, Sennaya, make stops at the observation platform by the monument to V. Chkalov opening a breathtaking view overlooking the part of the city located across the Volga River, visit Stroganov (Nativity) Church which is an architectural monument of the 17th century. At the end of the tour, you will walk on the territory of the Kremlin and visit the most ancient church of Archangel Michael dated back to the 17th century where the remains of the famous Kozma Minin were buried.

Day 9 Kostroma
Kostroma is a part of the so-called “Golden Ring of Russia”. During the tour today you will explore the oldest streets of the town, admire its ancient architecture: white washed stone churches, old trading rows; see the symbol of Kostorma, its business card – a fire observation tower, the most beautiful twelve domed church of Resurrection on Debra (the only preserved craftsmen’s church of the 16th century); see the five-domed Epiphany Cathedral housing the city’s most precious relic – a Byzantine icon called Our Lady of St. Theodore created in the 10th century . Later you will continue to the world-famous St. Trinity Ipatyev Monastery – a cradle of the Romanovs’ dynasty situated in the place of the coinfluence of two rivers the Volga and the Kostroma where Mikhail Romanov was announced to be the Tsar of Russia. You will visit the monastery grounds; see its architectural ensemble, Godunovs’ Tomb and reception rooms of Romanovs.

Yaroslavl
During the city tour of Yaroslavl, you will see and visit a lot of monuments and museums. It is really worth seeing, as it is the largest city of the so-called “Golden Ring of Russia,” founded even before Moscow (mentioned in chronicles from 1071). The city was named after Prince Yaroslav the Wise, who, according to the legend, killed a sacred wild bear (the pagan deity of local tribes) with his axe. Since those times a bear with an axe is Yaroslavl’s coat of arms. During the city tour, you will visit the church of Elijah the Prophet, decorated with frescos and icons dated back to the 17th century (a UNESCO World Heritage Site). Other points of interest include the magnificent Savior Monastery ensemble dating from the 13th century, majestic churches of the 17th century, and the newly rebuilt golden-domed Assumption Cathedral, which had been demolished after the revolution of 1917. You will stroll along the embankment to the place where two rivers, the Volga and the Kotorosl, converge and see an elegant rotunda.

Day 10 Uglich
Uglich, the town of rare beauty and tragic fate, was founded in 1148 and is situated in the place where the Volga river makes a sharp bend or “ugol” in Russian; which, according to legend, is how the town received its name. During the walking tour, you will visit the Uglich Kremlin Architectural Complex, which consists of 2 cathedrals, the Prince’s Chamber, the Cathedral of the Transfiguration of our Savior, and, of course, the church of the Tsarevich Dmitry on the Blood. At the end of the 16th century, Maria Nagaya, the seventh and the last wife of Ivan the Terrible, lived in Uglich Kremlin while in exile with her son, Prince Dmitry, and there in the garden he faced his death. Later, at the end of the 17th century, the church of Tsarevich Dmitry on the Blood was built to commemorate that tragic event. Only here you can taste delicious Uglich cheese, drink pure Uglich water out of the local water spring, and purchase the world-famous Uglich watch, the “Chaika.”

Day 11 Moscow City tour
Moscow is the capital of Russia; the most dynamically developing megalopolis. Our professional guides will lead you through this thrilling city and tell you some interesting facts about its foundation and present-day life. You will see the main square of the country, parade and concert grounds, Red Square, the GUM department store, Lenin’s Tomb, the restored building of the Bolshoy Theater, Lubyanka Square with the former KGB (now FSB) building, the rebuilt Manezh square, and the golden cupolas of the Cathedral of Our Savior. The New Maiden Convent is picturesquely spread out in the Moscow River bend and the building of MGU (the Moscow State University) on the Sparrow Hills has a breathtaking panoramic view of the city. At the end of the tour, you may choose to stay downtown or come back on board the ship.

Kremlin and Cathedrals Today you will have a unique chance to visit “the heart of Russia” – the territory of the Moscow Kremlin. It is one of the largest architectural ensembles in the world, including monuments built over the time from the late 15th to the 20th centuries. Historically, the Moscow Kremlin has been the residence of power and today it is the residence of the Russian President. The monumental walls and towers of the fortress capture the look of ancient Moscow with the Kremlin’s golden-domed cathedrals, old chambers, magnificent palaces, and beautiful office blocks. The unique museum complex includes several cathedrals: the Assumption Cathedral, (the coronation place of all Russian tsars), the Archangel Cathedral (the burial place of Russian tsars before Peter the Great), the Annunciation Cathedral, the Tsar Bell, the Tsar Cannon, and Ivan the Great Bell Tower.

Day 12 Moscow Disembarkation
Your cruise ends today. After breakfast, you will have time to pack your suitcases and after disembarkation, you will be transferred to the hotel, train station, or airport. 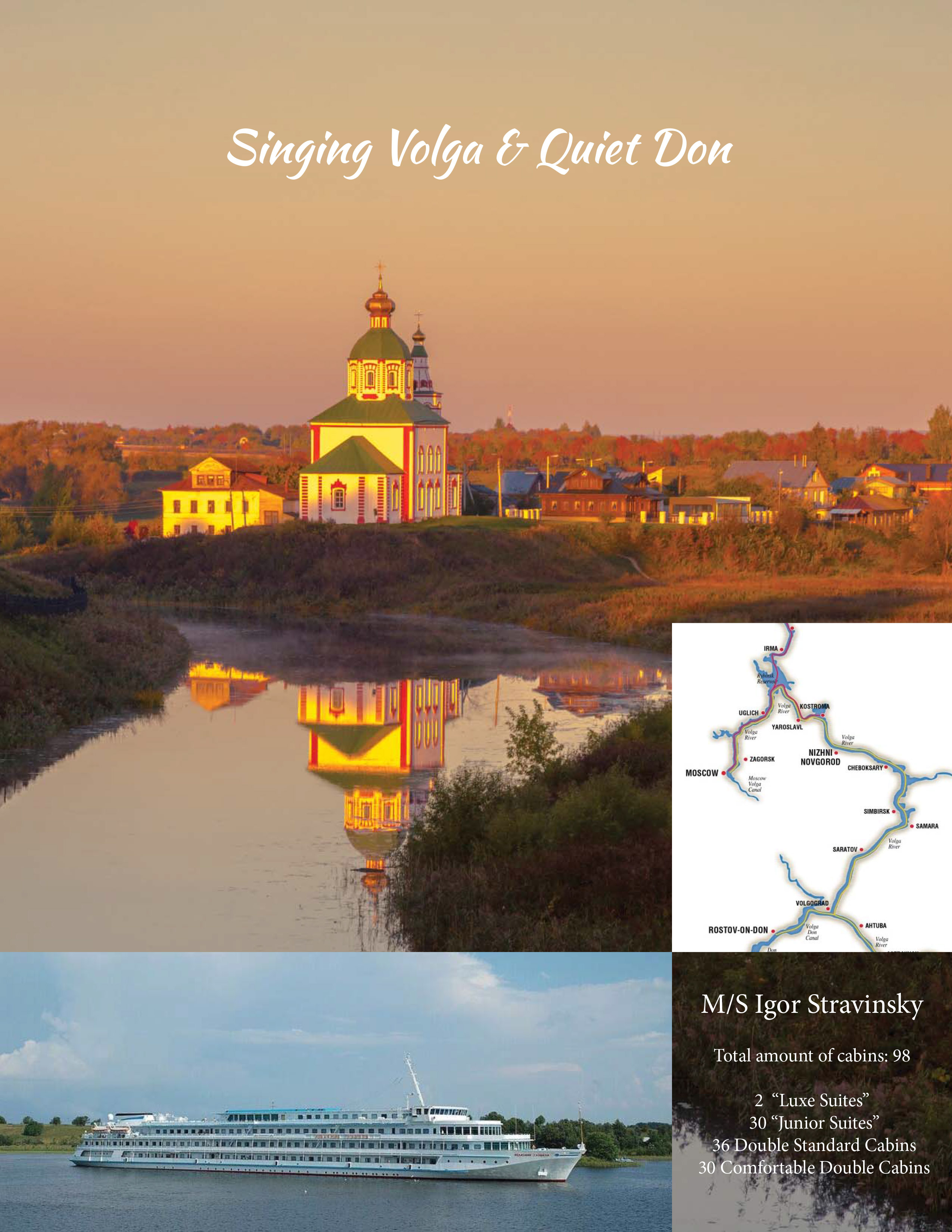